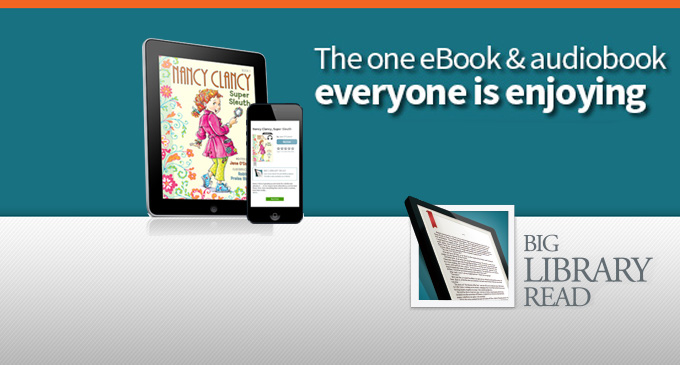 September 16, 2013 – Finger Lakes Library System today announced that it will be taking part in the Big Library Read program. Library card holders will be able to borrow and enjoy eBook and audiobook versions of the Big Library Read book, “Nancy Clancy, Super Sleuth” by Jane O’Connor, from September 16th through September 30th by visiting http://flls.lib.overdrive.com.

Big Library Read is an international program that gives libraries and library patrons unlimited simultaneous access to a popular title for a two-week period, creating a virtual, global book club. Interested patrons will be able borrow Book 1 in the Nancy Clancy series using a valid library card, and enjoy on all major computers and devices, including iPhone®, iPad®, Nook®, Android™ phones and tablets, and Kindle® [U.S. Libraries] without worrying about wait lists or holds. Titles will automatically expire at the end of the lending period. There are no late fees!

“We are excited to be participating in the Big Library Read Program which is featuring a children’s title this time and it allows as many library patrons to enjoy the title simultaneously”.

The Big Library Read program is made possible through a partnership between OverDrive, the leading supplier of eBooks and more to libraries, and HarperCollins, publisher of the best-selling Fancy Nancy series of children’s titles. To borrow the eBook and audiobook versions of “Nancy Clancy, Super Sleuth” as part of Big Library Read, patrons can visit http://flls.lib.overdrive.com.

About OverDrive
OverDrive is a leading multichannel digital distributor of eBooks, digital audiobooks, music and video. We supply a secure lending platform for 22,000 libraries, schools and retailers worldwide with support for all major computers and devices, including iPhone®, iPad®, Nook®, Android™ phones and tablets, and Kindle® (U.S. only). OverDrive has been named to the EContent 100 as a company that matters most in the digital content industry and is a member of the 2012 Technology Fast 500. Founded in 1986, OverDrive is based in Cleveland. www.overdrive.com