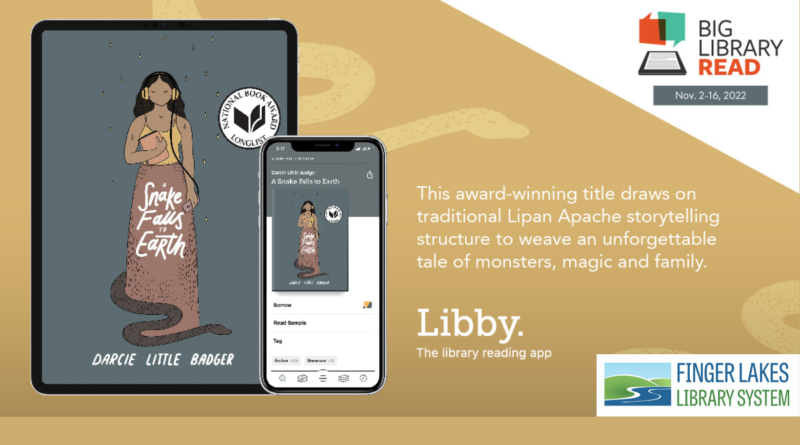 A Snake Falls to Earth by  Darcie Little Badger

Finger Lakes Library System cardholders are invited to check out OverDrive’s next Big Library Read, featuring the Newbery Award-winning young adult novel A Snake Falls to Earth. From November 2nd-16th, borrow Darcie Little Badger’s indigenous fantasy novel, from our digital collection for free without waiting on the Libby app or by visiting https://flls.overdrive.com/. Be part of the online discussion at https://biglibraryread.com/join-the-discussion/.

Nina is a Lipan girl in our world. She’s always felt there was something more out there. She still believes in the old stories. Oli is a cottonmouth kid, from the land of spirits and monsters. Like all cottonmouths, he’s been cast from home. He’s found a new one on the banks of the bottomless lake. Nina and Oli have no idea the other exists. But a catastrophic event on Earth, and a strange sickness that befalls Oli’s best friend, will drive their worlds together in ways they haven’t been in centuries. And there are some who will kill to keep them apart.

Dr. Darcie Little Badger is a Lipan Apache writer of two critically acclaimed fantasy novels for teens, Elatsoe and A Snake Falls to Earth. Darcie is an Earth scientist, writer, and fan of the weird, beautiful, and haunted. She earned her BA in Geosciences from Princeton University and PhD in Oceanography from Texas A&M University. She is an enrolled member of the Lipan Apache Tribe of Texas and married to a veterinarian named Taran.

A Snake Falls to Earth was published as an ebook by Levine Querido and as an audiobook by Recorded Books. The title can be read on all major computers and devices through Libby or libbyapp.com, including iPhone®, iPad®, Android™ phones and tablets and Chromebook™ without waitlists or holds. Through Libby, readers can also “send to Kindle®” [U.S. libraries only]. The title will automatically expire at the end of the lending period, and there are no late